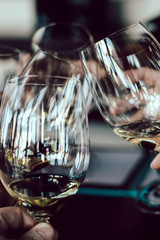 It’s the big one!

Can you imagine if you saw this scene in real life?

What would you say? Who would you tell? Would anyone believe you?

Maybe you’d had a glass (too many) of Malbec?

Gauchos riding horses on the pampas in Patagonia, yes… but priests on Llamas? Rarely seen!

These days, Argentina is very much associated with Malbec but, centuries ago, the grape variety originated in the vineyards of France.

Now, the grape is once again famous in the region of Cahors where it’s often blended with a dash of Merlot & Tannat. Some Argentine producers have even started making wines back in Cahors.

In fact, most people don’t realise that there are Malbec wines that don’t come from Argentina!

Malbec is a grape of many names. In France, the variety is sometimes called either Auxerrois (not the white, Alsace grape), or Cot (in the Loire valley). It is still one of the grape varieties that are allowed in Bordeaux, but, these days, it’s not very common to find it planted there.

The style that is loved by so many is opulent & weighty, very fruity & (usually) oaky. Argentina can produce hundreds of examples like this at prices right across the spectrum, so keeping a lot of people very happy just drinking the wine… and then you add the beef!

The combination of red meat with Malbec is truly a match made in heaven (for meat lovers) and, if you don’t want the meat portion, just swap it for something like a spiced lentil and spinach pie (recipe on BBC Good Food).

Most red wine drinkers wouldn’t turn down the offer of a bottle of Malbec, so get yourself along to the tasting. Just don’t turn up on a Llama!

We personally select all our products to offer you the best quality and value we can find. Great Deals. The more wine you buy the more you save. Delivery. We offer a next working day delivery service. 120 Day Money Back Guarantee. Our simple refund and returns policy. Payment Security. We use the leading secure online payment provider, so your details and payments are always safe as they can be. One hour delivery window. With our next day service. Customer ratings. See what our customers say about us.

Made in Mendoza Malbec 2019