The wine takes its name from the historical Beaujolais province and wine producing region, located north of Lyon, and covering parts of the north of the Rhône département and parts of the south of the Saône-et-Loire département (Burgundy). While administratively considered part of the Burgundy wine region, the climate is closer to the Rhône and the wine is unique enough to be considered separately from Burgundy and Rhône.

The region is known internationally for its long tradition of winemaking, and more recently for the popular Beaujolais nouveau.
Beaujolais AOC is the most extended appellation covering 60 villages, and refers to all basic Beaujolais wines. It implies a minimum alcohol of just 9%; Beaujolais Supérieur implies wine with more than 10% alcohol. A large portion of the wine produced under this appellation is sold as Beaujolais Nouveau.

Beaujolais-Villages AOC, covers 39 communes / villages in the Haut Beaujolais, the terrain of this region is hillier with more schist and granite soil composition than what is found in the regionsof the Beaujolais AOC and the wine has the potential to be of higher quality. If the grapes come from the area of a single vineyard or commune, producers can affix the name of their particular village to the Beaujolais-Villages designation.

Cru Beaujolais, the highest category of classification in Beaujolais, account for the production within ten villages / areas in the foothills of the Beaujolais mountains. Unlike Burgundy and Alsace, the phrase cru in Beaujolais refers to entire wine producing area rather than an individual vineyard Seven of the Crus relate to actual villages while Brouilly and Côte de Brouilly refer to the vineyards areas around Mont Brouilly and Moulin-à-Vent is named for a local windmill. These wines do not usually show the word "Beaujolais" on the label, in an attempt to separate themselves from mass-produced Nouveau, there are, in fact, not allowed to produce Nouveau. From north to south the Beaujolais crus are- Saint-Amour, Juliénas, Chénas, Moulin-à-Vent, Fleurie, Chiroubles, Morgon, Régnié, Brouilly and Côte de Brouilly.

Saint-Amour - The wines from Saint-Amour are noted for their spicy flavours with aromas of peaches.
Juliénas - This cru is based around the village named after Julius Caesar. The wines made from this area are noted for their richness and spicy with aromas reminiscent of peonies.
Chénas - Once contained many of the vineyards that are now sold under the Moulin-à-Vent designation. It is now the smallest Cru Beaujolais with wines that are noted for their aroma of wild roses.
Moulin-à-Vent - Wines are very similar to the nearby Chénas Cru Beaujolais. This region produces some of the longest lasting examples of Beaujolais wine, with some wines lasting up to ten years. Some producers will age their Moulin-à-Vent in oak which gives these wines more tannin and structure than other Beaujolais wines.
Fleurie - One of the most widely exported Cru Beaujolais. These wines often have a velvet texture with fruity and floral bouquet.
Chiroubles - This cru has vineyards at some of the highest altitudes among the Cru Beaujolais. Noted for their delicate perfume that often includes aromas of violets.
Morgon - Produces earthy wines that can take on a Burgundian character of silky texture after five years aging. These wines are generally the deepest color and most rich Cru Beaujolais with aromas of apricots and peaches.
Régnié - The most recently recognized Cru, graduating from a Beaujolais-Villages area to Cru Beaujolais in 1988. One of the more fuller bodied crus in this categories. It is noted for its red
currant and raspberry flavours.
Brouilly - The largest Cru in Beaujolais, situated around Mont Brouilly and contains within its boundaries the sub-district of Côte de Brouilly. The wines are noted for their aromas of blueberries, cherries, raspberries and currants.
Côte de Brouilly - Located on the higher slopes of the extinct volcano Mont Brouilly within the Brouilly Cru Beaujolais. The wines from this region are more deeply concentrated with less earthiness than Brouilly wine. 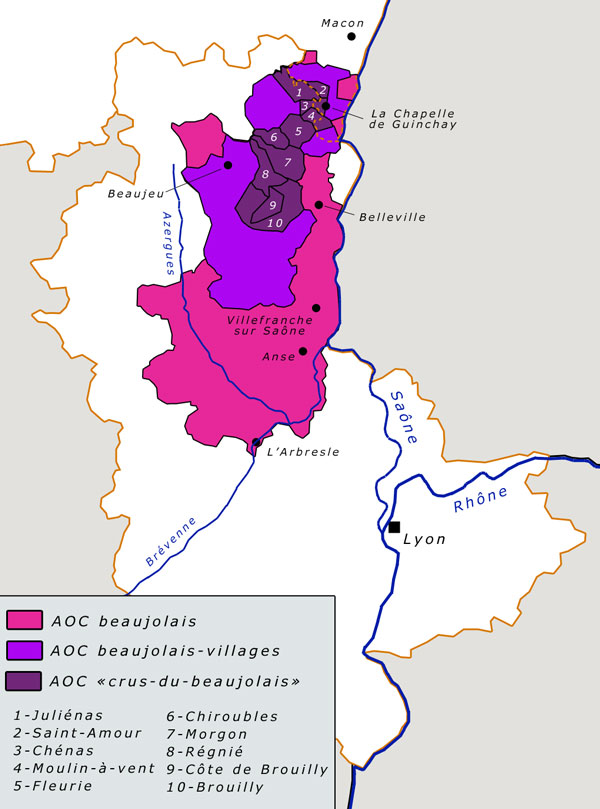