Vine cuttings from the Cape of Good Hope were brought to the penal colony of New South Wales by Governor Phillip on the First Fleet in 1788. An attempt at wine making from these first vines failed, but with perseverance, other settlers managed to successfully cultivate vines for wine making, and Australian made wine was available for sale domestically by the 1820s.

In 1830 vineyards were established in the Hunter Valley. In 1833 James Busby returned from France and Spain with a serious selection of grape varieties including most classic French grapes and a good selection of grapes for fortified wine production.

Domestic consumption of wine vastly increased during World War Two (WWII). The critical shortage of beer saw the thirsty armies of both the US and Australia seeking alternative beverages and until the 1960’s approximately 80% of Australian made wine was sweet fortified sherry and port styles, known in the UK as ‘Colonial Wine’.

Contemporary tastes swung slowly away from fortified wine under the influence of post-WWII migrants from Europe who introduced their culture of enjoying food with table wine in restaurants and at home. Since then, Australia has rapidly become a world leader in both the quantity and quality of wines it produces. Major grape varieties are Shiraz, Cabernet Sauvignon, Merlot, Chardonnay, Sauvignon Blanc, Sémillon, and Riesling.

The country has no native grapes, and Vitis vinifera varieties were introduced from Europe and South Africa in the late 18th and early 19th centuries. Some varieties have now been bred by Australian viticulturalists, for example Cienna and Tarrango. Although Syrah was originally called Shiraz in Australia and Syrah elsewhere, its dramatic commercial success has led many Syrah producers to label their wine "Shiraz".

Over recent years many winemakers have begun exploring so called "alternative varieties" other than those listed above. Many varieties from France, Italy and Spain, for example, Petit Verdot, Pinot Grigio, Sangiovese, Tempranillo and Viognier, are becoming more common.

Australia's most famous wine is Penfolds Grange. The great 1955 vintage was submitted to competitions beginning in 1962 and over the years has won more than 50 gold medals.The vintage of 1971 won first prize in Syrah / Shiraz at the Wine Olympics in Paris. The 1990 vintage was named 'Red Wine of the Year' by the Wine Spectator magazine in 1995,which later rated the 1998 vintage 99 points out of a possible 100. Wine critic Hugh Johnson has called Grange the only First Growth of the Southern Hemisphere. The influential wine critic Robert Parker, who is well known for his love of Bordeaux wines, has written that Grange "has replaced Bordeaux's Pétrus as the world's most exotic and concentrated wine". 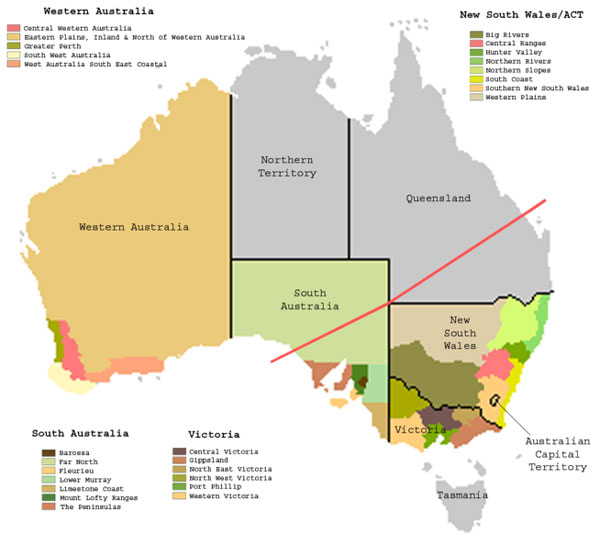