The town of Laguardia - Surrounded by vineyards & the Sierra Cantabria - The home of Artadi
[Photo attribution (above) Mikel Arrazola, CC BY 3.0, via Wikimedia Commons] 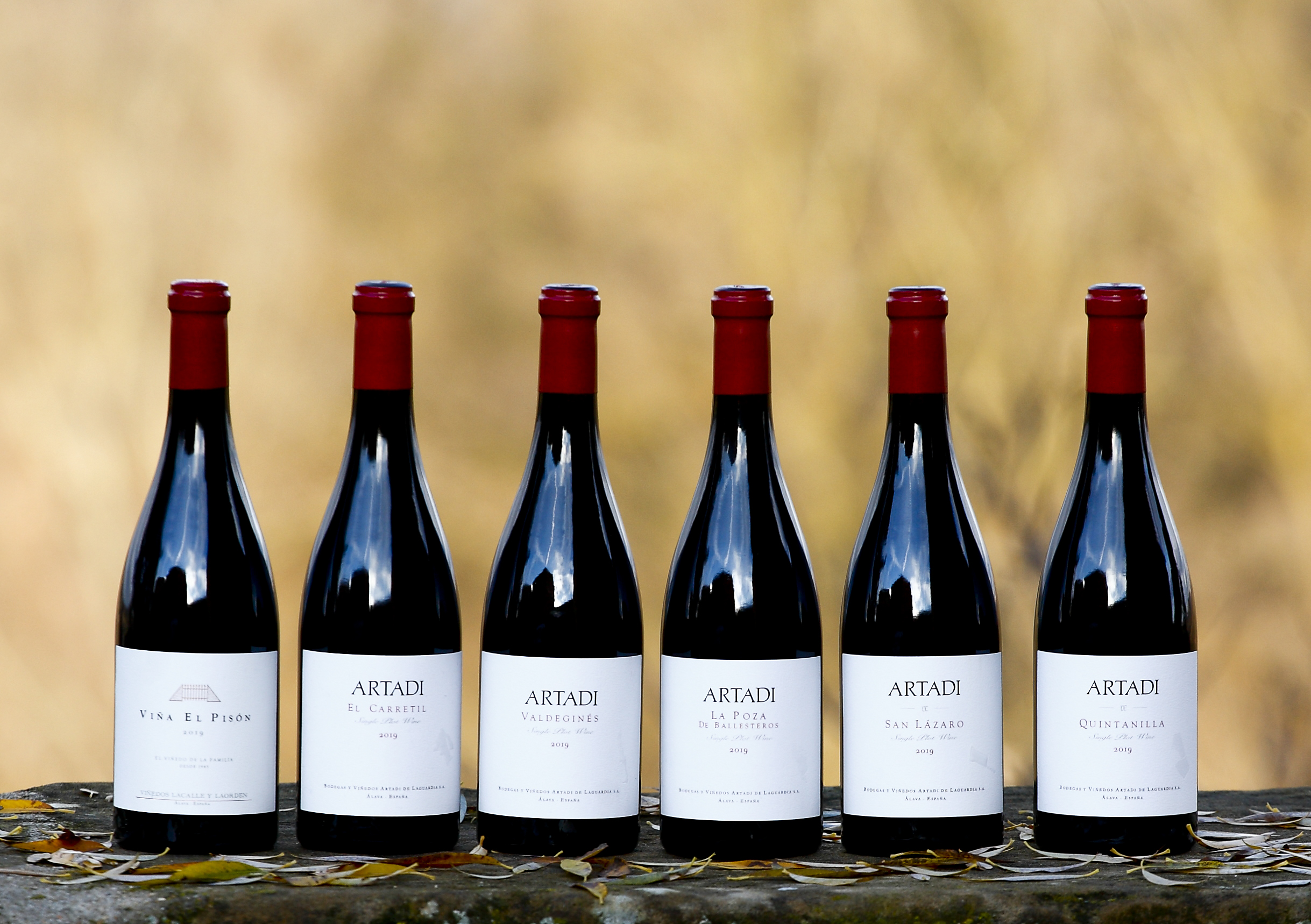 One of the most respected wineries in La Rioja doesn't market its wines as Rioja. They used to, but not wanting to be told when to pick, or how to make their wines (including ageing requirements for Crianza/Reserva/Gran Reserva) and, importantly for Artadi, the ability to produce both "village" and "single vineyard" wines made to their own exacting standards, they decided to sell all their wines as "Alava, Espana" with no mention of Rioja anywhere on the bottles. A risk? It would seem not.

When first launched, Artadi's Vinas de Gain Tinto was labelled and sold as a Rioja wine for £5 a bottle!

How times and prices have changed with the current 2019 release selling for £29.99

What the critics say:

"The young red 2019 Viñas de Gaín was produced with Tempranillo grapes from different vineyards in Laguardia and Elvillar at 450 to 700 meters in altitude that fermented in oak and stainless steel vats followed by malolactic in barrel and an élevage in barrel of nine months. They aimed for a fresh and fruit-driven, juicy red that comes from a low-yielding year, so the wine is concentrated but keeps the approachable style. It has nice balance. In warmer and riper years, they do shorter macerations at lower temperature and a short élevage to keep the aromatic and fruit-driven character, avoiding heavy wines. This is always a very good value within the Artadi range. 90,000 bottles produced. It was bottled in September 2020."

Another item to add to the great "cost of living crisis" being experienced by wine drinkers in the UK.

Many wines from Europe, including Spain, have had astronomical price rises this year, but some have still managed to be more reasonable. Supply and demand plus poor volume harvests (again) has also led to stock shortages of wines from famous-name regions. Hopefully, the 2022 vintage will improve things. We'll have to wait and see.

Artadi dates back to 1981 when its current owner, Juan Carlos López de Lacalle, together with his family and thirteen local growers founded Artadi in the heart of Alava. Juan Carlos represents the fourth generation of winemakers, now joined by his son and fifth generation, Carlos.

The current vineyards are now spread over 65ha with the majority being Tempranillo.

A small area is planted with Viura for the production of the white version of the Vinas de Gain, plus a Joven bottling (carbonic maceration, co-fermentation of Tempranillo & Viura), and even a Cava. 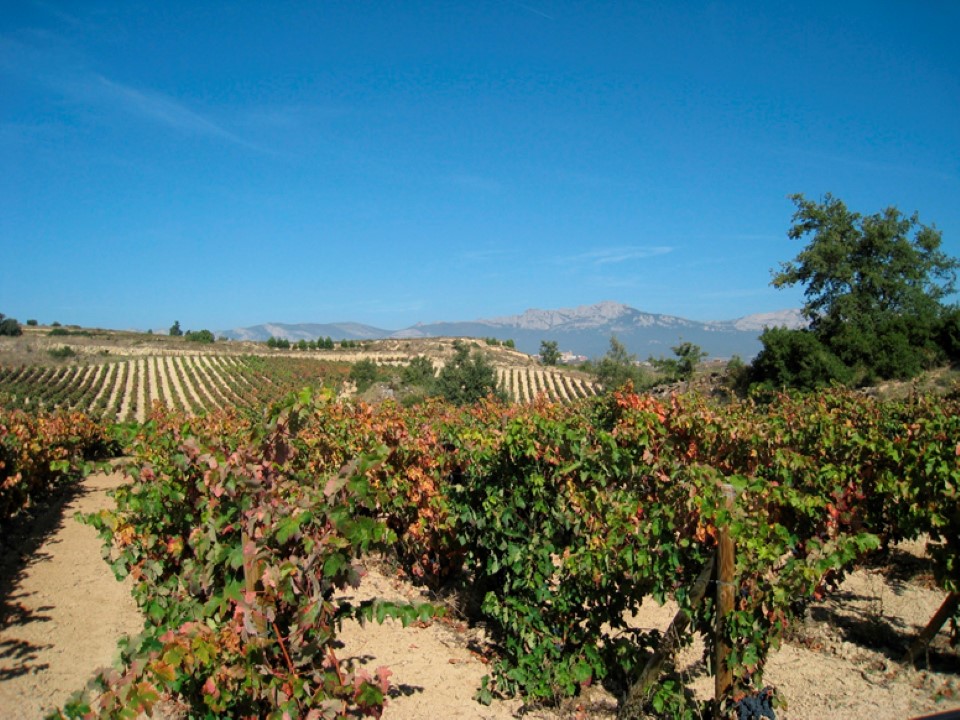 One of six of Artadi's single plots. Planted in 1975, the 5.6ha  "El Carretil" vineyard with deep, clay/limestone soil produces a wine that is rated 97/100 points by both the Guia Penin and Robert Parker's Wine Advocate. Retailing at around £250 per bottle!!!

A serious wine at a serious price. 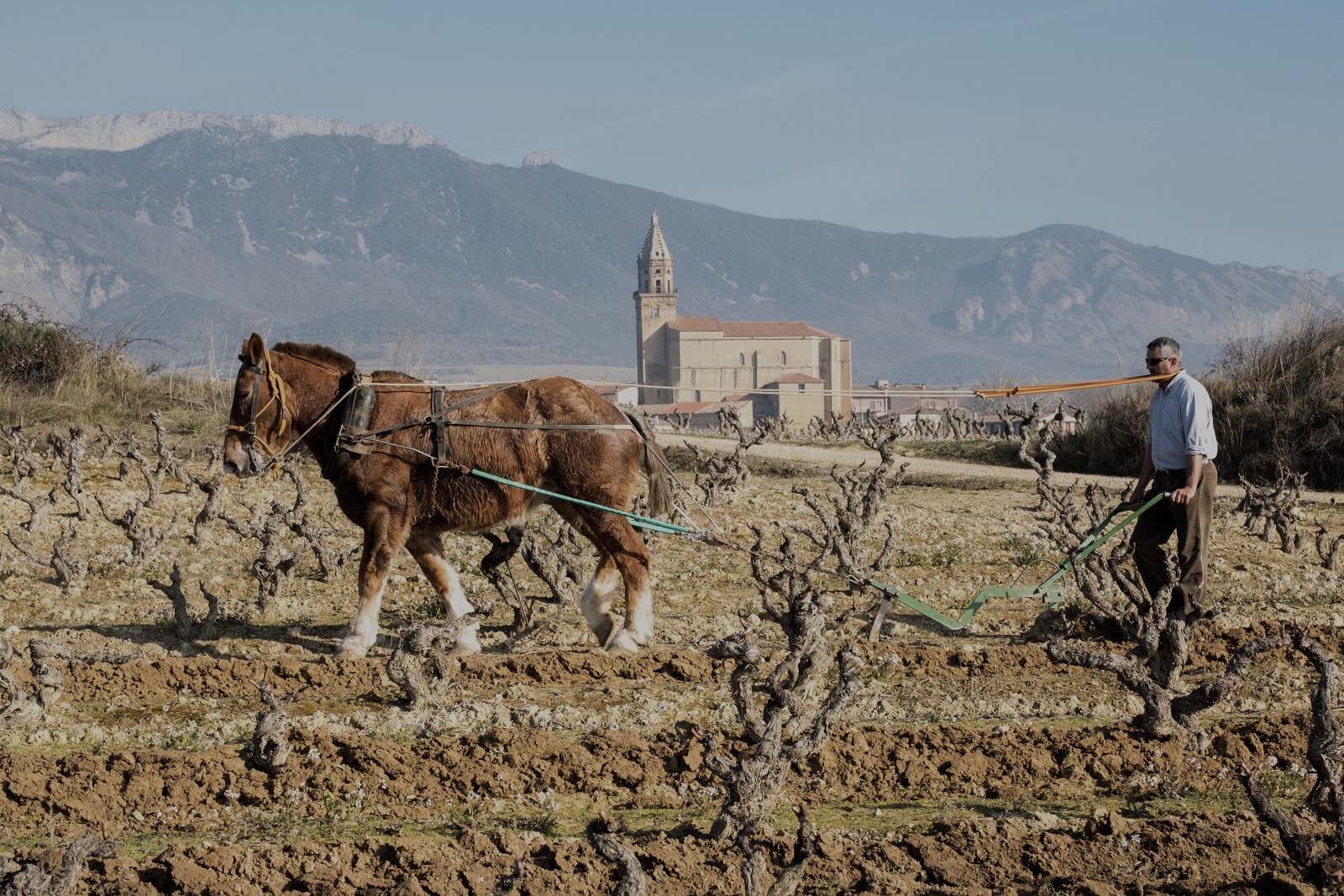 All of Artadi's wines are organic using sustainable viticulture practices including the use of horses, avoiding soil compaction by tractor usage, for ploughing the vineyards. No synthetic chemicals or fertilisers are used.

The vineyard which truly makes a remarkable Tempranillo. Planted in 1945, these ancient vines make a sublime wine. Fruit is sourced from just 2.4ha of gnarled, old vineyards for  Vina El Pison, Artadi's top tier wine, meaning that this rare wine now sells for in excess of £400 a bottle. I missed tasting a "Parker 96/100" rated bottle when it was under £100. I wish I could go back in time...This wine regularly scores 97/98/99 points and, occasionally, even a perfect 100.

From the 2014 vintage the wine has been sold as coming from "Alava", no longer "Rioja". 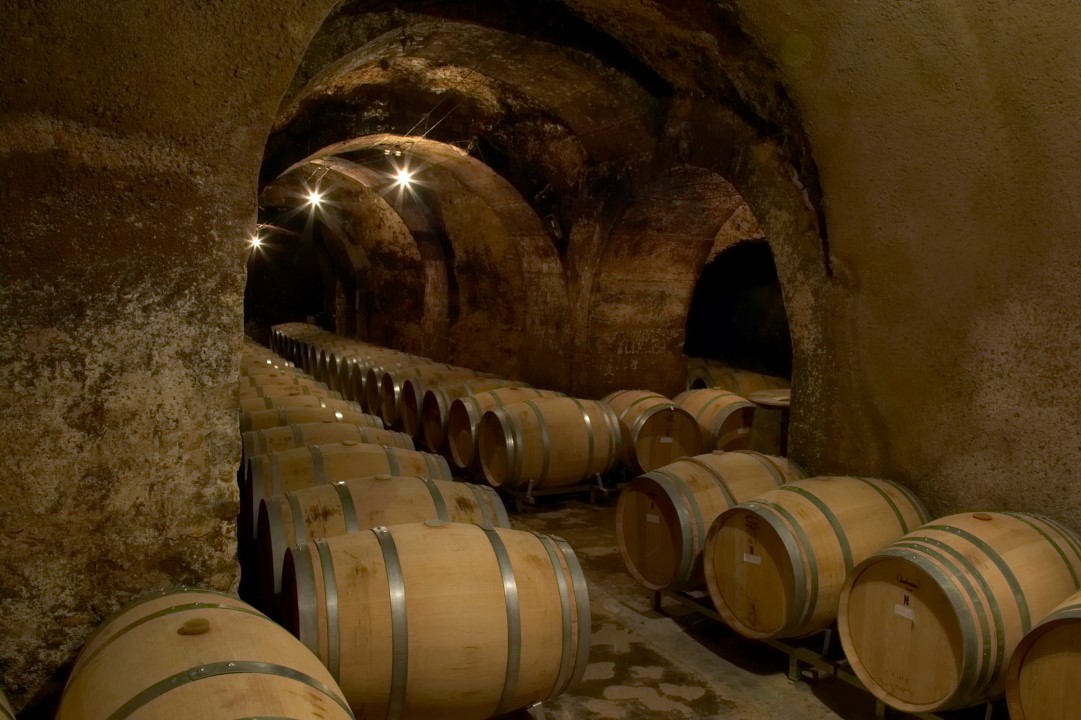 The barrel cellars at Artadi. It's still all about the ageing of Tempranillo in oak. What a taste! 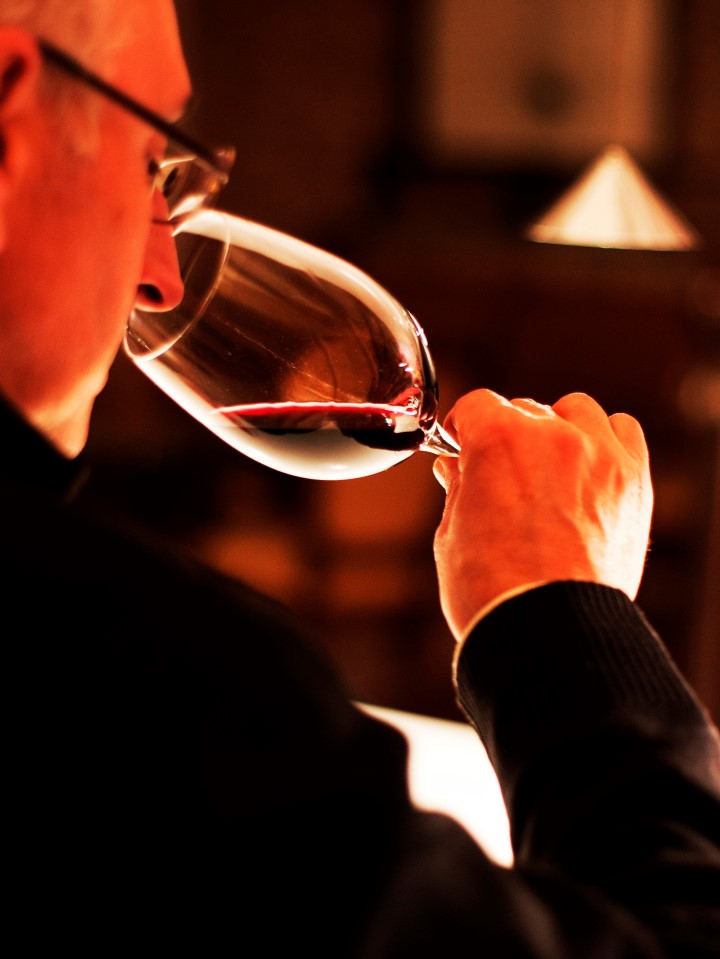 In 1996, Artadi branched out into Navarra. South-west of Pamplona, in the foothills of the Pyrenees, around 40ha of Garnacha vineyards are being used to make just two wines.

What the critics say:

"The 2018 Pasos de San Martín is the wine produced with Garnacha from the cooler zone of San Martín de Unx in Navarra where they have 11 hectares of 40-year-old vines on a southeast exposure where the soils are rich in limestone and silt. As has been the case in the last few years with Artadi's reds, it had a short élevage of only nine months in 500-liter French oak barrels, including malolactic. The climate and soils are quite similar to Rioja, maybe a bit more extreme here, cooler in cool vintages, warmer in warm years, so this 2018 shows a little like the range from Rioja, elegant and with more freshness. It's quite pure, clean and with very fine tannins." 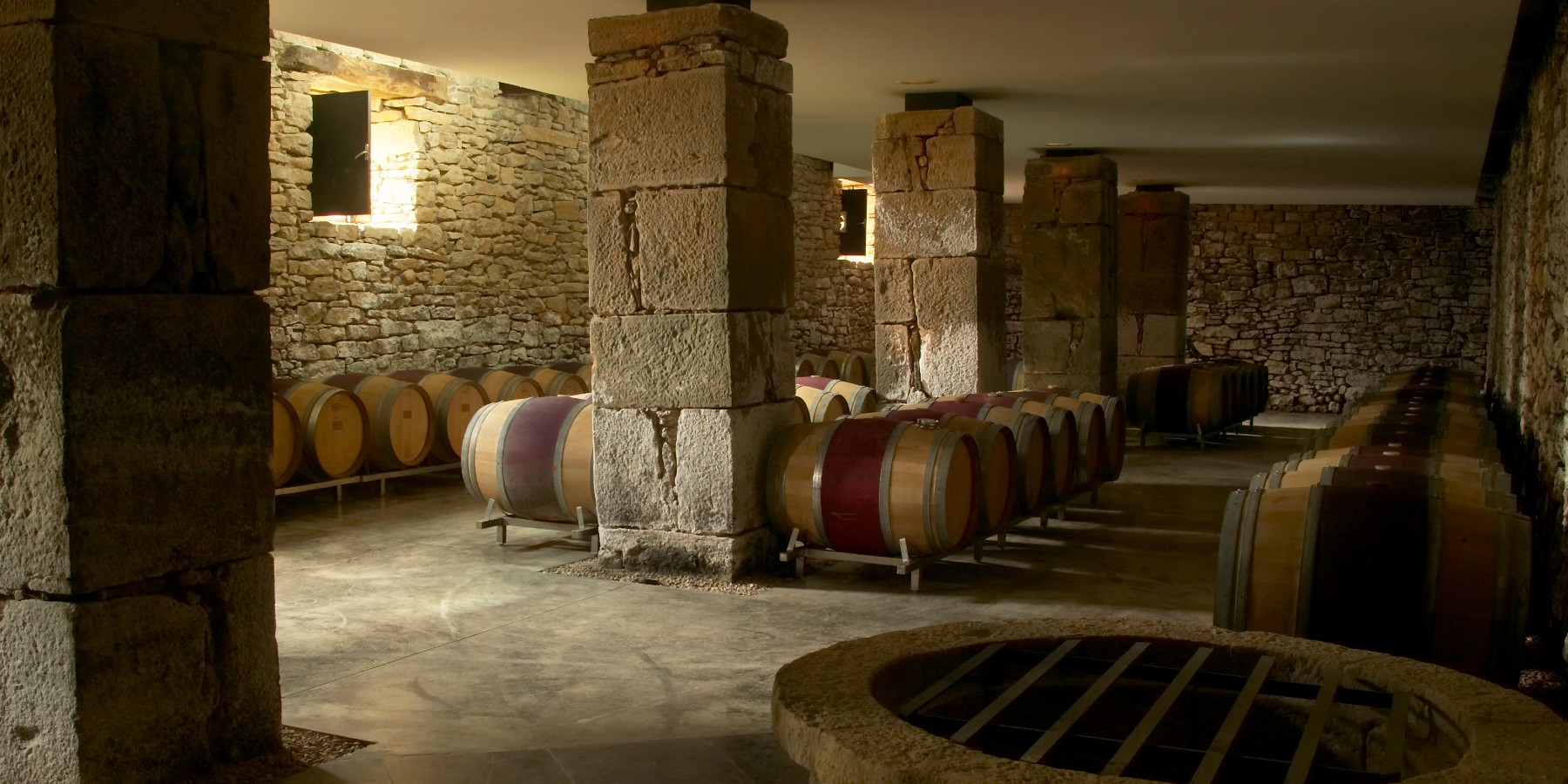 Historically, Navarra wines have always been based on the Garnacha grape with much of the wine being sold as a dry rosé style. An example of this wine is still made by Artazu, but their aim is to return the Garnacha reds to their former glory. Prices haven't caught up with the those of the Alava and are still a bargain for the quality. Try buying a sub £30 Chateauneuf-du-Pape to gauge the value for money you get from these Spanish reds!

Here at Frazier's we like to think these Garnacha and Tempranillo wines are some of the best available and wholeheartedly recommend them to you.