A fine bunch of Pinot Grigio. Even though it's a white grape variety, it really does look like this when ripe.

Pinot Grigio: What do we really know about this ubiquitous grape?

1/ Did you know it's a mutated form of the Burgundian red grape, Pinot Noir?

2/ Called both "Pinot Grigio" in Italy, or "Pinot Gris" in France. In other countries the name is often used to indicate the style with "Gris" often being used if the wine has some residual sweetness.

3/ "Grigio" wines tend to be light, tasting of apple/orchard fruit and lemon/citrus, whereas "Gris" wines are usually quite full flavoured and have a profile with nuances of honey and peach/stone fruits.

4/ It can be made as a still, sparkling, white, blush, or even orange wine!

Try some of Valli's "The Real McCoy" orange from Gibbston in New Zealand to experience this new "old" winemaking method. Be warned, skin-contact wines often have an oxidised/sherry-like character. Some more than others.

Inexpensive glugging wine, or seriously pricey, such as Gravner's Anfora aged example which will set you back over £100 a bottle.

A certain reputation has been acquired over time which, for many people, offers them a safe option when choosing a white from a restaurant wine list, or from hundreds of bottles on shelf in a shop, or possibly a thousand lines on a website.

It's a pleasant enough, stand-alone, glass of vino and it will go with most food options regardless of whether you're a meat eater, vegetarian, or vegan. It's versatile and it's everywhere.

Obviously Italian, or is it?

Who knew that, outside of Italy itself, the USA was the largest producer of the Pinot Grigio variety (& consumer of the top Italian brand, "Santa Margherita") ?

There's really only one California brand in the UK, "Barefoot" from Gallo. It's a mass-market item in the supermarkets at the lower end of both the price and quality spectrum. Nothing new there to excite a wine drinker who's looking past the ordinary, but it does sell...even though it's quite sweet to taste, although consumers assume it's actually dry.

Oregon and Canadian PG is very hard to find in the UK, or even in their home regions, and will certainly be expensive if you do manage to track down a bottle.

Many an Argentine winery has this variety, but it seems hard to sell; even the delicious "XIV" dry wine from Pulenta.

Excepting the big Chilean brands Casillero del Diablo and Errazuriz, as yet, not much is seen in the UK from either Chile or South Africa. Again, fairly indistinct in character, so no better than most of the Italian.

Other "New World" countries, including Australia & New Zealand produce both volume brands such as [yellow tail] & Villa Maria and, at the other end of the scale, hand-made wines such as The Lane from the Adelaide Hills, South Australia, the Martinborough based winery,  Ata Rangi's "Lismore", or the Alsace-styled, botrytis affected, exotic dessert wine from Greywacke in Marlborough.

Greywacke: "Perfume of honeysuckle, peach blossoms and apricot preserves with an undercurrent of musk, baking spices and lemon marmalade"

The Germans (as Rulander/Grauburgunder), Austrians and the French (Alsace Pinot Gris) grow a decent amount, but in Europe, Italy is king of the PG. Slovenia (Marjan Simcic), Hungary, Romania, Croatia and even England (Stopham Estate) have tiny quantities, and I have to say that a Croatian wine I had a few years' ago (for £6) was stunning! Golden in colour, rich texture and with around 5 years' bottle age, it had turned into something quite remarkable for the price. Alas, as far as I know, it's not imported. Just another great wine memory to keep the grey cells ticking over.

My first taste experience of any form of PG was probably a wine from the Kaiserstuhl in Baden, Germany. It was labelled as a "Rulander" and came from vineyards planted on an extinct volcano. Very unique and supplied from the back of an old VW van driven over direct from Germany. This was in the days of Liebfraumilch, back in the 80's, cost about 5 times the price, and almost impossible to sell regardless of the number of medals stuck on the bottle. By comparison, any Italian version was a simple sell in the decades that followed.

Nowadays, most German examples are crisp and dry in character with Villa Wolf being a typically good bottle to try.

In France, the home of the grape, Pinot Gris is mostly found in Alsace with everyday wines and those of "Grand Cru" status being sold. Being a warm region, Alsace PG tends to be fully ripe at harvest and are often around 15%ABV. Confusingly, the wines can vary from fully dry to sweet dessert wines with often no mention of sweet/dry on the labels. Late harvest and botrytis affected grapes are also sold separately. I'm sure you'll want to experiment.

Personally, I really like the Gold Medal winning Château de Riquewihr, Grand Cru Vorbourg from Dopff & Irion. It now has 10 years' bottle age and is incredibly richly textured. Still under £20 a bottle for such a complex wine!

2012 Grand Cru Vorbourg: "Sweet, complex and intense aromas including fruit jelly, pineapple, spices like cumin, a hint of smoked almond. The palate is intense and flavoursome with flavours of fruity apricot jam, mandarin liqueur, honey and a long peppery-spicy finish."

Back to the mainstream, I'm not going to bore you with production figures/area under vine/yields, etc, but, suffice to say there's a lot of Pinot Grigio in the north of Italy which is very, very bland.

Since 2017, a new "DOC" of Delle Venezie covers the regions of Trentino-Alto Adige, Friuli-Venezie Giulia and the Veneto. Staggeringly high yields have been reduced a bit, but when compared to other popular styles of white wines you still have too much boring, dilute examples which, to be honest, are just "cheap" and nothing else!

When Italian PG burst onto the UK market it instantly became the go-to wine to match with almost anything. It was the spring/summer white wine of choice. Unoaked, light and unassuming, it was crisp and dry and, mostly, good value. But then it became a commodity wine with prices falling to absurdly low levels and, of course, the quality dropped and it became very boring to drink with no flavour!

Today, with short harvests and poor exchange rates, the prices have risen again, but only the better wineries have improved their standards.

If you drink out at pubs/restaurants, you can probably judge the quality of the establishment's wine list by their PG.

Some are still awful, but search out the good ones.

If you're willing to pay a bit more than normal you can get wines such as the single vineyard Alpha Zeta "Terrapieno" from the Valpentena Valley in north-eastern Italy.

"A wine of great intensity and balance. It has lifted aromas of pear and bread crust, classic for Pinot Grigio from this region. The nose gives way to lovely weight and a silky texture on the palate, with hints of delicate spice and biscuit. Finishing dry with zesty acidity to maintain freshness and an impressive length."

Pinot Grigio is also grown further south in Tuscany and wines such as those by Castello Banfi and Ruffino are both  major brands on the US market.

Heading down to Sicily, the wines have more tropical, pineapple fruit and a richer, weightier palate than those made in the Veneto. You would think it was too warm on the island for grapes to keep their acidity, but in the right location (and altitude) it succeeds. Suitable for pairing with typical Sicilian seafood pasta dishes and mushroom risottos,  Miopasso needs to be tried if you prefer a fuller bodied PG. Good value at under a tenner.

With the natural colour of the grape skins, it's pretty easy to make a "blush" style. Often, co-fermentation with red grapes, such as Pinot Noir & Merlot, is practised to give sufficient pink colouration without affecting texture, or having different shades of colour between batches in the winery. These wines are usually priced at the lower end of the scale and there aren't really any premium examples. A pink Pinot Grigio in the UK is not going to break the bank or your credit card.

Sometimes, with extended skin contact, these wines have an almost "brassy" colour and taste very different from the commercially produced pink wines that you'll see on every restaurant list.

The most extreme example of an "orange" PG is probably that made by Josko Gravner whose vineyards are located on the border between Venezia Giulia and Slovenia. The wines are made "naturally" in Georgian clay amphorae which are partially sunk into the cellar floor. There's no temperature control in these vessels and indigenous, wild yeasts are used to begin the fermentation. All vineyard and winery work is timed by the different phases of the moon. 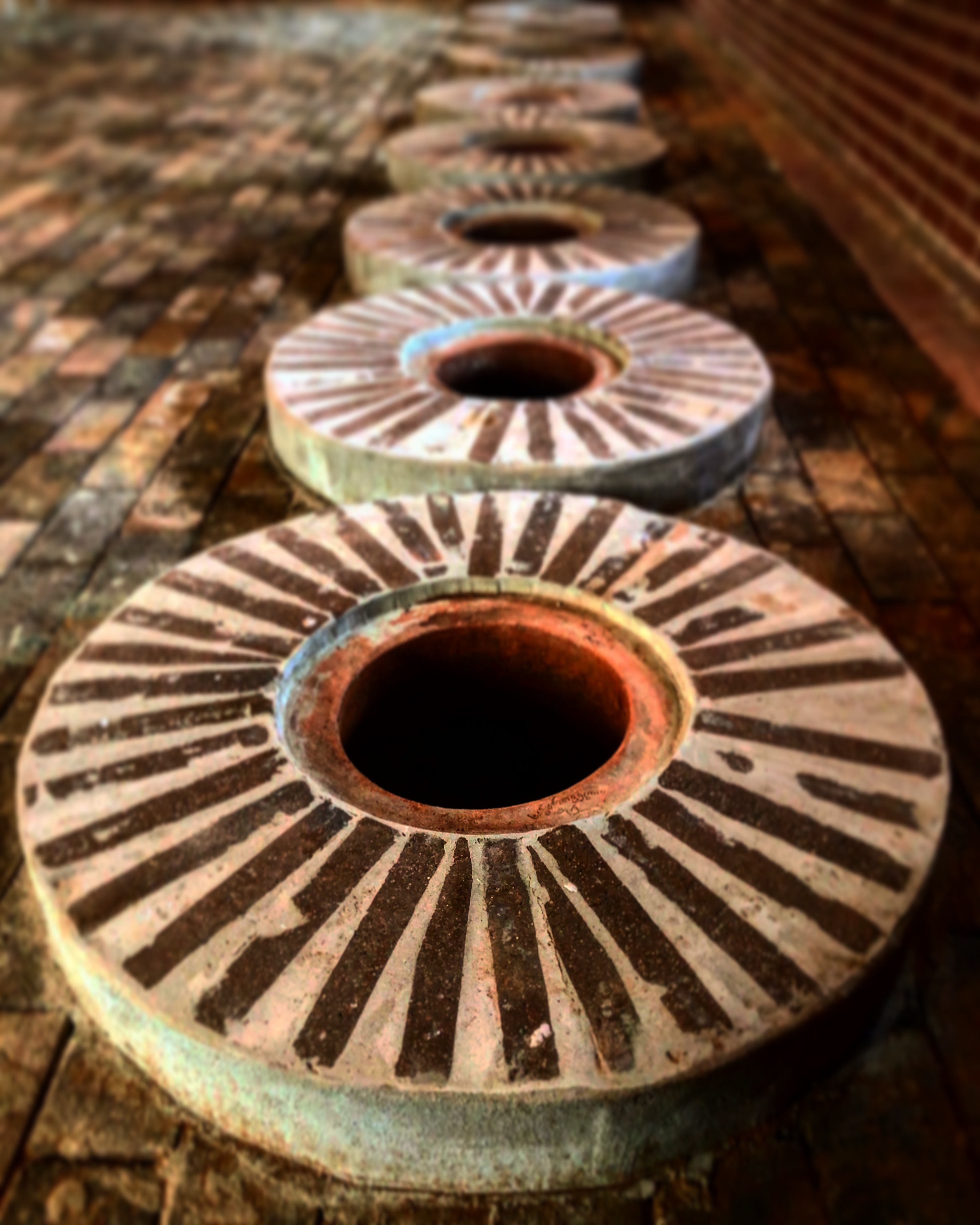 Like an iceberg, just the top of the Qvevri amphorae are visible, with most being hidden below the ground. They're big enough to climb into using a ladder.

After drawing-off and pressing processes are completed, the wine is poured back into the amphorae for five more months before it begins ageing in large oak barrels, where it's left for another six years. Finally, the wine is then bottled without fining or filtration and is bottle aged for 5 years before its release. Currently, the 2006 & 2007 vintages are available from Gravner, but they're very expensive. You have to like the style before committing to his wines!

So, there you have it. A grape that's actually very interesting, not boring at all.