The main grapes in Côtes du Rhône are Grenache, Syrah and Carignan for red wine, Clairette, Ugni Blanc and Grenache Blanc for white wine. Côtes du Rhône is also famous for the Viognier white wine made in the northern part of the region (Condrieu, Château Grillet) which is one of the most distinctive in France. Over 75% of Côtes du Rhône wines are red. They are generally thick, robust and their alcoholic content higher than that of most French wines. The Rhône is generally divided into two sub-regions with distinct vinicultural traditions, the Northern Rhône and the Southern Rhône. The northern sub-region produces red wines from the Syrah grape, sometimes blended with white wine grapes, and white wines from Viognier grapes. The southern sub-region produces an array of red, white and rosé wines, often blends of several grapes such as in Châteauneuf-du-Pape. 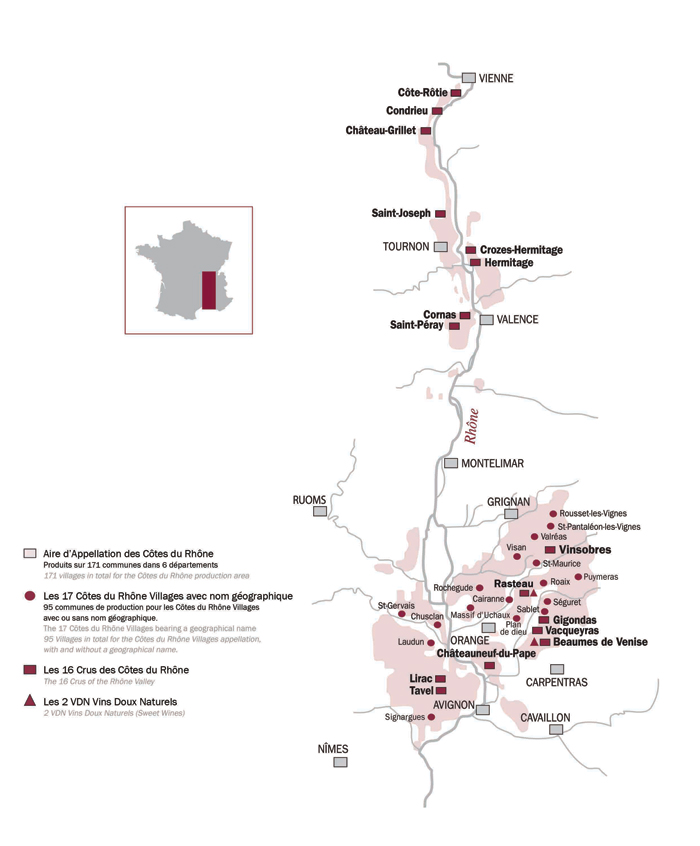 Syrah is the only red grape variety permitted in red AOC wines from this sub-region. The grape, which is believed to have originated in or close to the Rhône region, is also widely known as Shiraz, its name in Australia and much of the English-speaking world, and has recently become very popular with consumers around the world. For wines bearing the Cornas AOC designation, Syrah must be used exclusively, whereas other reds from the northern Rhône sub-region may be blended with white wine grapes, either Viognier or Marsanne and Roussanne, depending on the appellation. However, while this is allowed by the AOC rules, blending with white grapes is only widely practiced for Côte-Rôtie. Viognier by itself is used for white wines from Condrieu and Château-Grillet. Marsanne and Roussanne are in turn used for the whites from Crozes-Hermitage, Hermitage, Saint Joseph, and Saint Péray.

The southern Rhône's most famous red wine is Châteauneuf-du-Pape, a blend containing up to 13 varieties of wine grapes, both red and white, as permitted by the Châteauneuf-du-Pape AOC rules. Other nearby AOC regions, including Coteaux du Tricastin AOC, Côtes du Ventoux AOC, Côtes du Vivarais AOC, Lirac AOC, Tavel AOC and Vacqueyras AOC, may contain even more varieties in the blend. Gigondas AOC, on the other hand, is predominantly made from Grenache Noir has a more restricted set of permitted grapes. Depending on the specific AOC rules, grapes blended into southern Rhône reds may include Grenache, Syrah, Mourvedre, Carignan and Cinsault. The reds from the left bank are full bodied, rich in tannins while young, and are characterised by their aromas of prune, undergrowth, chocolate and ripe black fruit. The right bank reds are slightly lighter and fruitier.