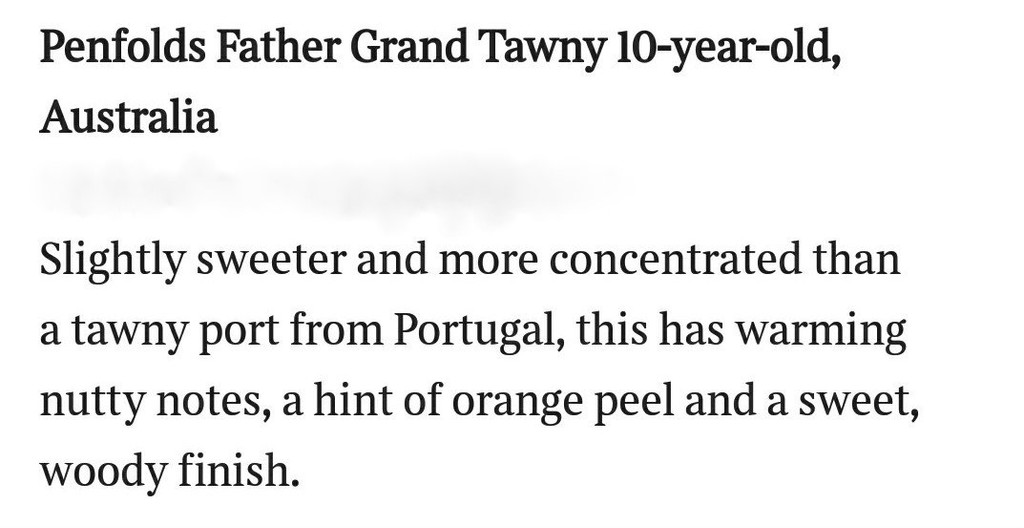 Uniquely Australian, "Father Grand" is a blend of many outstanding tawny components based on Shiraz, Mourvedre, Cabernet Sauvignon and Grenache, with a minimum blended average age of ten years, separately matured in seasoned old oak casks. The result yields a wine of generous concentration, vitality, exceptional balance of fruit and oak age complexity. The tawny lingers in the mouth, finishing clean and tight.

"The 10 year old, pale amber-tawny colored Father Grand Tawny is intensely scented of dried mulberries, sultanas, treacle and caramel with a marmalade lift. Big, expressive and rich with a nuttiness in the mouth, it finishes very long and very sweet." 90/100 Lisa Perrotti-Brown - The Wine Advocate

In 1844 Christopher Rawson Penfold planted vines on the slopes of Magill to produce fortified wines. By 1881 Penfolds was responsible for one third of South Australia's fortified wine production.

Penfolds Grand Tawny is a tribute to 170 years of winemaking excellence housed within the bluestone cellar walls of Penfolds Magill Estate. It is a blend of outstanding Tawnies matured in small oak casks for an average of ten years. The Penfolds Tawnies are made in Solera Systems (stacked blending systems) at Penfolds’ Kalimna Tawny Cellars. These wines are all aged in 300-litre hogsheads (oak barrels) that are at least twenty years old when they reach the Tawny Cellars, having been used for other Penfolds wines up until that point. The maturation process deliberately takes place under corrugated iron. At the height of summer the temperature on the top stack can reach 55 degrees; while in winter, the temperature can fall below 8 degrees. These cyclic swings in temperature are vital to the maturation process, as evaporation, concentration and controlled oxidation are all a part of the complex nature of the aromas and flavours. The combination of extended barrel maturation and the Penfolds tradition of excellence ensure the 10 year old Tawny has exceptional fruit richness, mellow aged complexity and great length of flavour.

Loathed to put any recommendation as this 'Port' appears to be in short supply, except at Frazier's, and I don't want that shortage to escalate, it's far too good to highly recommend and cause a sell out! But as a precaution I've stocked up.

Dangerously drinkable Port. Beautifully smooth and ideal for Fathers Day or a gift for a new dad....or just a great gift. Great service too.

The best fortified tawny. Our family and friends love it for our chease servings. Until now bought 36 bottles. we love it.

Couldn't ask for more. Great service (prompt and kept me informed), plus this is a lovely Tawny Port - great way to finish off an evening meal!

Bought as a gift because an Aussie friend bought us a bottle of the Grandfather version of this. If this is half as good, the recipients will be well pleased. Can echo the excellent service and bomb-proof packaging.

Bought as a gift, came quickly and well packaged Difficult to get hold of in UK so a prized item

I don't know a great deal about Port, but I do know that this port is delicious, very drinkable and a great price.

I can't personally comment on the quaff-ability of this port as it's a Christmas present for my son but he swears by it! However I can say that the delivery was very quick & within about 30 seconds of the start of the emailed slot time & it was in bomb proof packing so would definitely recommend Frazier's.